Posted by Yoke Wong on 9/28/2011 to Piano Chords
Share |
In my last blog article I mentioned the importance of piano chords and chord inversions. I also briefly discussed the formula of building a major chord. Another common chord or triad is the minor chord. You know you have heard a minor chord when the chord sounded mellow and even a bit sad.
A majority of the music from the Asian world is composed in the minor key, which gives a unique flavor, sometimes associated with Asia and nostalgic feelings.
You too can build a minor chord using a specific formula, 3+4 semitone.
For example: F minor chords 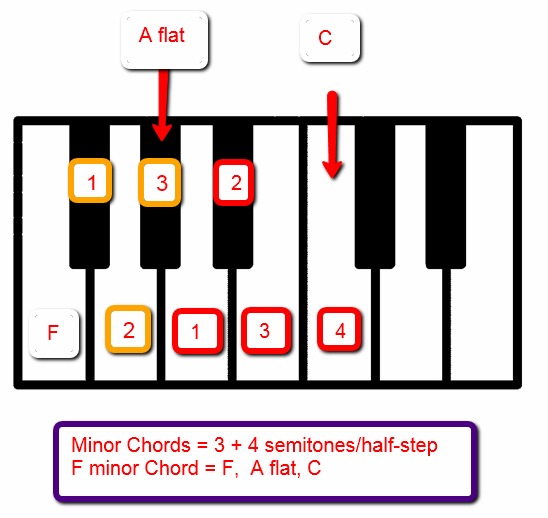 Some of the most impressive classical music was composed in the minor key such as the Pathetique sonata by Beethoven, composed in the key of C minor. Musicologists often wondered whether Mozarts piano sonata K. 457 inspired the Pathetique sonata since both compositions are in C minor and have three similar movements. The second movement of the Pathetique, adagio cantabile, has a similar theme to Mozarts sonata.
However, Beethovens sonata makes use of a distinctive motif line throughout, a major contrast from Mozarts music.
You can compose a simple melody using a minor chord progression such as A minor - D minor - A minor (I-IV-I chord progression).
Previous Post
Next Post

Rose H.
Reply
Thank you for the great information. I actually noticed that on some songs but i never give it much thought. Now i know how important those piano chords are. I better start try piano improvisation. Thank you so much Yoke.
Louisa
Reply
The piano chords and formula greatly helps! Wonder if you can post more tips on how to learn and play piano chords - those extended and complicated chords in your future piano lessons. Louisa From San Diego
armando
Reply
Quick View