The Farmer In The Dell

The Farmer In The Dell Piano Sheet Music

The Farmer in the Dell is a world famous nursery rhyme, song, and singing game which originated in Germany in 1826 as Es fuhr ein Bau'r ins Holz. Although in Germany it was originally considered a courtship game and rhyme. While the modern version of the song and game are well known, many people (the writer included) do not know the meaning of Dell. According to Wikipedia (2011), a dell is a small wooded valley, and like dale, the word originated from the old English word, dael.
The modern version of the song’s melody is leant from the much earlier tune, A Hunting We Will Go (1777). While the games rules seem to be universal amongst English Speaking nations, there are three differences in the phonetic, hi-ho, the derry-o, throughout England. For example in London this segment is replaced by ee-i, tiddly-i.
Print and Download Complete The Farmer In The Dell Piano Sheet Music
Download The Farmer In The Dell Audio File (MIDI) 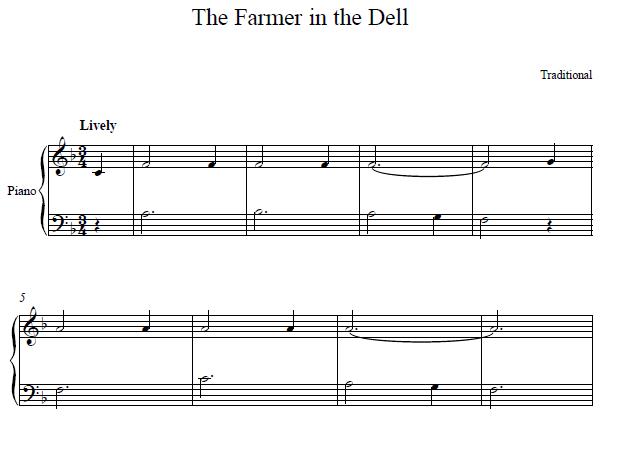