How to Play Hymns on Piano

A beginner adult student recently asked “why are hymns so hard to play?”

Playing hymns is challenging to the new piano student. This is due to the fact that hymns were first written for four part vocal harmony, not for piano. The four parts--soprano, alto, tenor and bass—make it hard for a pianist to read all four notes at the same time. 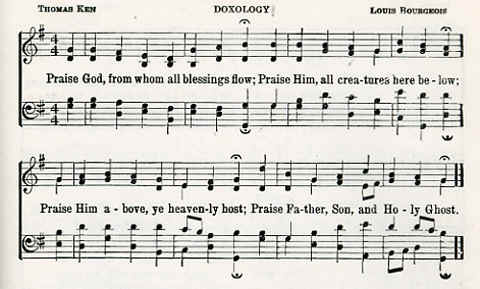 The chords that can be added are variations of the G Major and D Major chords.

The last notes of the next phrases are “Host” and “Ghost.” Both are G Major chords, G-B-D. Again, move both hands up octaves and play inversions of the chord with each chord getting one beat.

To summarize, add chords at the end of a musical phrase, keeping the same meter. Play inversions of the chord, going up an octave each time. This is a simple way to add chords to a hymn.

Agbenyega Peter
Reply
i really appreciate your efforts God richly bless you all for the lessons are very superb and well elaborated stay blessed
Jasmin Samaroo
Reply
I will certainly try these. They sound simple enough and will provide feedback as soon as I can Thank you.
IJoyce Lapsker.
Reply
I like this, good exercise, for mind and coordination.
IJoyce Lapsker.
Reply
Thank you very much. I like this for coordination, mind and concentration. I would appreciate a little larger print of the music. Sincerely, Joyce
Viviene Morrison-Ivey
Reply
As usual I so look forward to these very simple to understand tutorials. I play in Church from time to time. I will certainly try it out and give you my feedback. Thanks so much Viviene
Debra Ann Petitan
Reply
Thank you for this great enlightening information. Please continue. If you can, would you address playing "Cocktail Piano." I love the American Standards and strive to play them with my improvised accompaniment.
Norine
Reply
Thank you so much for all the help you give. I have learned much from you. May God bless you in all your efforts to help others
HB
Reply
Yoke, great example of how to play hymns. The more you play them the easier they become and is great practice for sight reading. Blessings
ALPHONSO ROSARIO
Reply
Thank you for guiding & inspiring your students.
Cricket
Reply
Yoke, thanks for this wonderful presentation! In about two weeks I will be 66 years old, & through my years I have marveled at my joy in hearing a beautiful hymn. To help me make it more clear, & help me to memorize & play it more easily, would you agree that (for example) just in the first measure with the words |"God, from whom all"| could we think with each of the four words, on the corresponding four beats these four chords: |G major, D major, E minor, B minor| ? ~ Thanks!
maxwelle tipa
Reply
thank u 4 your hints on hymns
Annabelle
Reply
Dear YokeI've been reading articles with comments,on how thankful they were for trying techniques that you shared. I wish coulbe one of them. I was asked so many times to play in the church to accompany a choir but that is the thing I never do in my life I am always playing alone, on and off just when I have the time, I wanted to play in the church ,but I'm afraid I might ruin the choir/congregation, . The choir members are voluntary so they nevr practice just they come and sing, w'c means I have to catch up their timing everytime, isn't it difficult?Maybe you can help me build my guts. thanks, Annabelle
Wanda White
Reply
Could you do a short video showing your explanation? I am a visual person. Thank You.
Gary
Reply
What do mean by "always use the same fingering"? Can you show what fingering you would recommend for this hymn?
emmanuel
Reply
this is nice but can i have a lesson on how to follow a song i.e playing by earing
Snowball
Reply
Is there an easy way for beginners to play the melody and an accompaniment just by looking at the hymnal's sheet music? I am really enjoying your videos. Thank you so much!
Davidson Nirina
Reply
Hi Thank you so much for this lesson, it willl guide me in all my efforts to play hymns.
Peter
Reply
Thanks for the teaching the Hymn “Doxology”. I learn a lot from you that the other piano teacher never teach so details. I hope I can get more song like that in the future. Thanks again!
Jeanine Scott
Reply
Yoke, All practical and workable explanations. Thanks for a refresher course. Jeanine
daniel
Reply
is there any other way to play that doxolygy himn using the same notes to hard for me
Wally Gee
Reply
KUDOS! I've waited 70 years for this simple explanation.
Barbara
Reply
If the span of the notes is wider than the reach of your hand, redistribute the notes by playing the tenor note with your left hand. An example is in the above music on the word “host” in the second line and also in the last measure (the words “Holy Ghost”). In the above passage, did you mean to say "by playing the tenor note with your RIGHT hand?
Adeshina
Reply
This is a well explanatory teaching. Thanks
Quick View