Perhaps the most famous of all French songs known to the English speaking world is, Frere Jacques. The songs notoriety is not restricted to English however, and there are translations in almost every modern language in the world. A French nursery melody, the song is traditionally sung by a group of people in a round. When the initial singer or singers reach the end of the first line/lyric, the second singer or group begin from beginning of the song. This is repeated until the singers decide to stop.
Although conjecture remains about the origin of the song, the earliest claim to the songs first published date is by James Fuld, who in 1995 stated that the tune was first published in 1811.
Although the song is still widely sung in the original French, an approximate English translation of the famous lyrics would read:
"Are you sleeping? Are you sleeping?
All Night Long, All Night Long,
Morning bells are ringing! Evening bells are ringing!
Ding, dong, ding. Ding, ding, dong."
Print and Download Complete Frere Jacques Piano Sheet Music
Download Frere Jacques Audio File (MIDI) 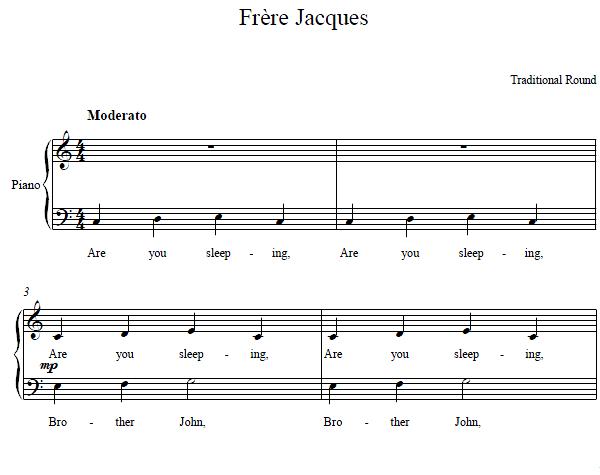 The chinese version of this sheet music is called "Two Tigers". You can also download our free chinese sheet music.