Do Your Ears Hang Low

Do Your Ears Hang Low is a popular childrens song well known throughout English speaking countries. The melody is from another song, Turkey in the Straw, made famous by 1820s and early 1830s blackface performers; the most notable of whom include, George Washington Dixon, Bob Farrell and George Nichols. The melody was used for another song, Zip Coon, in which all three writers mentioned claimed to have written the song; a dispute which was never resolved.
Various versions of Do Your Ears Hang Low exist, with two separate versions listed in the Roud Folk Song Index. The most controversial of the two, and also the earliest known version from 1941, substitutes the lyric ears for parts of male genitalia. Risqué at the time and still considered rude, this version was first printed in 1992, in the book Randolph, Roll Me in Your Arms. Highlighting the rude nature, although only recently published this version was documented in 1941 by Vance Randolph, who chronicled events from the Second World War.
Print and Download Complete Do Your Ears Hang Low Piano Sheet Music 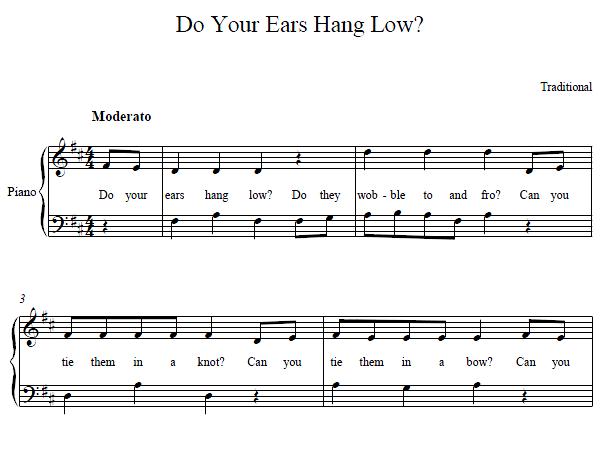