Anyone who has ever put hand to piano would be familiar with Chopsticks. The music was written by Euphemia Allen. He used a pseudonym for the song - Arthur de Lulli, The Celebrated Chop Waltz. Allen was only 16 years of age when she wrote the piece in 1877, with arrangements for piano solo and piano duet. She specified the Chopsticks melody needs to be played in duo-part harmony, having little fingers pressing down. A continous motion of chopping sounds can be heard. While the name suggests it should be played in (waltz) meter, it is often played in 6/8 time.
Rather than playing the notes in unison, a Russian version of Chopsticks was adapted, named Tati Tati in which the notes are played alternatively. Expanding on this theme, a group of piano composers and and notably Franz Liszt composed piano variations for more hands; specifically, four-hand, in 1879 under the title Paraphrases. In the four years following, this was expanded to 24 variations and 17 other pieces.
Print and Download Complete Chopsticks Piano Sheet Music
Download Chopsticks Audio File (MIDI) 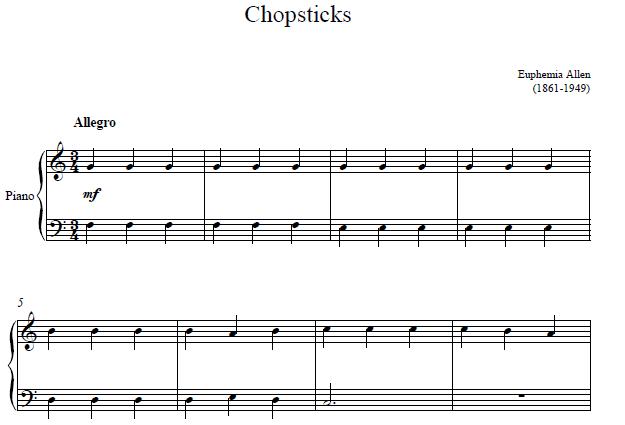