The song Bingo, or B-I-N-G-O, Has origins as an English Childrens folk song. However, the version sung today by children, and involving a hand clap as a substitution for one or more letters as the song progresses, seems to be a combined version of several songs.
The song can originally be dated to another written in 1780, titled "The Farmers Dog lept oer the Stile". There is a notable resemblance from this version to the lyric of today, namely: his name was little Bingo as opposed to todays, Bing-O was his name-O; and one line which spells the letters, B-I-N-G-O which is identical to todays version. There is also a change in lettering, which may have been substituted for the hand clap of today.
The song today is mainly sung by American children, and the current form may be attributed to Alice Bertha Gomme, who recorded eight unique versions of the song in 1894. All of the vesions were written encompassing childrens games, and were completely different. Over time it is thought that the versions somehow meshed to become the now popular version enjoyed by American Children.
Print and Download Complete Bingo Piano Sheet Music
Download Bingo Audio File (MIDI) 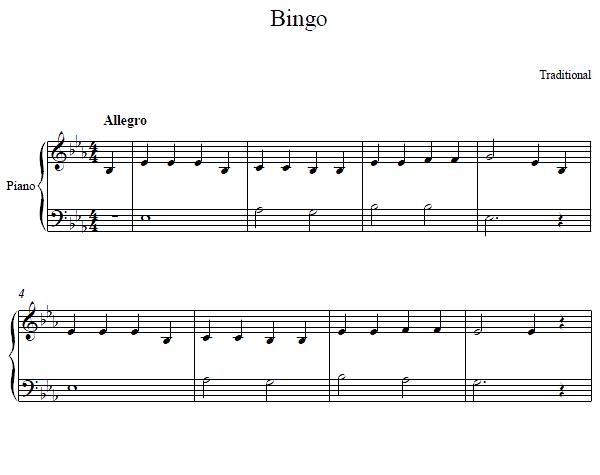