Yankee Doodle is a famous Anglo-American song, which was written by “Dr. Shackburg”, according to the U.S Library of Congress. And while Shackburg is regarded as the lyrical author, the melody’s origin remain unknown, they are thought to be either Irish or Dutch. The song was first mentioned in the 1767, in the opera The Disappointment. An earlier, printed version of the song dates back to 1775, when a British soldier wrote to mock a U.S. Army official from Massachusetts. The song also played a part of the Civil War, as the song was used as a taunt. People in the South sang lyrics mocking the north, and Union Democrats sang lyrics mocking the South.
Ironically, while Yankee Doodle was written to mock the Americans, the song remains a symbol of American pride today. Today it is one of the most well known song and popular patriotic piece for USA. Yankee Doodle is also a state song for Connecticut. Amongst other English nations it is also well known as a children’s song, because of its simple melody and reference to the easily recognizable items of “feather”, “hat”, and “pony”. Quite happily accepting the strange lyrics as nonsensical, children remain blissfully unaware of the songs stormy past use.
Print and Download Complete Yankee Doodle Piano Sheet Music
Download Yankee Doodle Audio File (MIDI) 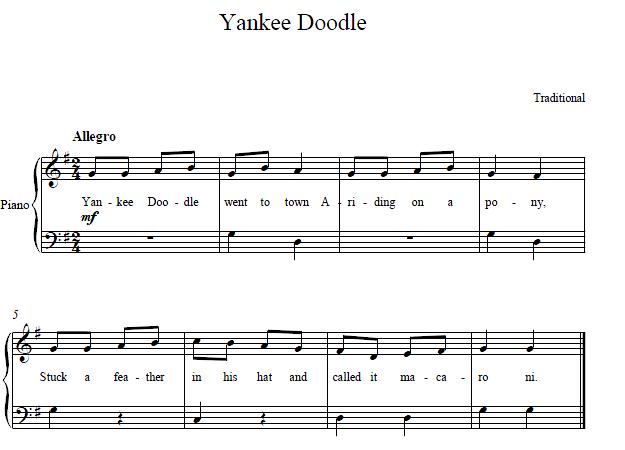