In 1717 King George 1st, requested a concert to be performed on a barge on the river Thames. He commissioned George Frideric Handel to compose the music.
Water Music is the collection of music first played for this occasion, and is often considered three suites. The king was so impressed with the music that he ordered it be repeated three times on the day. The 50 musicians included all the instrumentation of a Baroque orchestra, with the exception of the harpsichord and timpani, which were inconvenient to bring aboard the barge.
Often considered Handle’s most important work for what we now view as the orchestra, Water Music has become popular in contemporary culture. Water Music was used as the identifying music for Anglia Television for almost thirty years. The D major movement, Alla Hornpipe has been used in many commercials, as has the Air and Bourrée from the F major suite. Disney World uses Water Music for a parade of sea creatures (as background music), while Allegro in D was used in an important scene from the 1992 movie Dead Poet’s Society.
Print and Download Complete Water Music Piano Sheet Music
Download Water Music Audio File (MIDI) 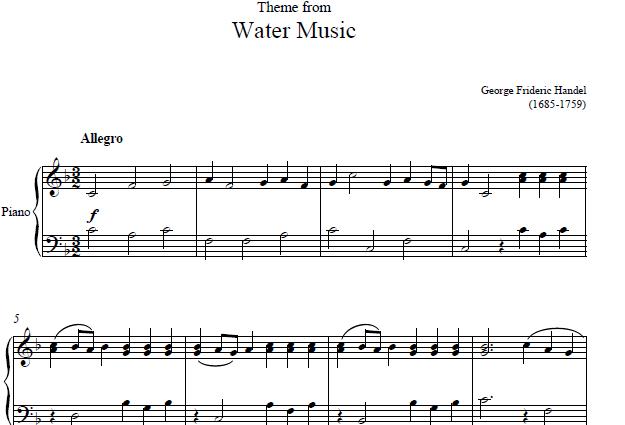