Row Row Row Your Boat is a traditional English language nursery rhyme and children’s song, which is often sung as a round between two or more people. First printed in 1852 in the United States, the author is unknown though there are suggestions the song arose from American minstrels. The song was published again two years later with the same lyrics, but with a different tune, and which is the same one commonly used today. The first recording of the modern version took place in 1881, and although Eliphalet Oram Lyte was credited, it is still unclear whether he was the composer or adapter.
Row Row Row Your Boat consists of just four short lines, although additional words are often substituted in jest by children. The song in its entirety is:
Row, row, row your boat,
Gently down the stream.
Merrily, merrily, merrily, merrily,
Life is but a dream.
Despite the song being short in composition, there are varying philosophical theories pertaining to meaning. The most common viewpoint is that the song is a metaphor and perhaps instruction guide for life: thus, go gently and merrily down the stream of life.
Many claim a more spiritual and even philosophical interpretation, believing that the final line signifies that life on earth is merely a dream, and that the kingdom of heaven awaits us. These deep, underlying themes, coupled by the songs immediate recognition around the globe, are certainly remarkable for what is considered a child’s song and nursery rhyme containing just eighteen words.
Print and Download Complete Row Row Row Your Boat Piano Sheet Music
Download Row Row Row Your Boat Audio File (MIDI) 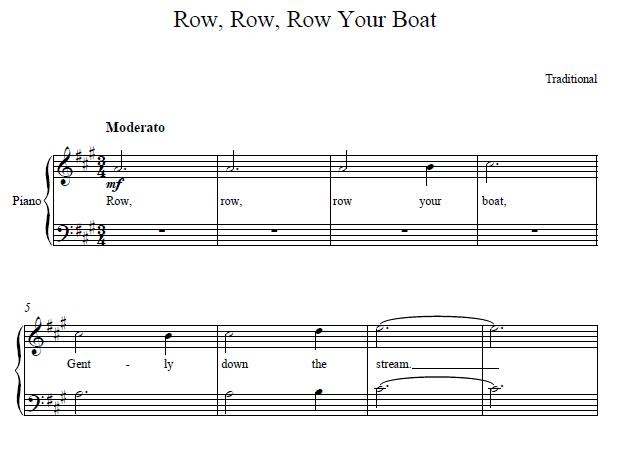