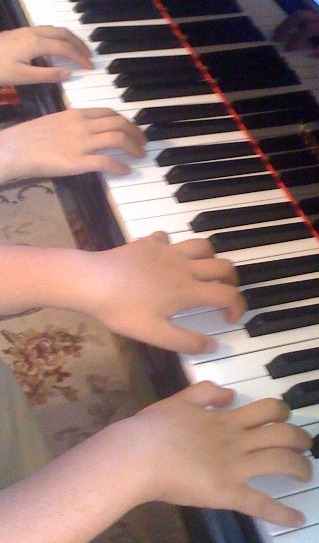 Four-hand piano music has been around for a long time: Mozart and Beethoven, Ravel and Stravinsky - among many - wrote music for piano duo performance.  The lasting popularity of four-hand piano music more than likely stems from the desire of music lovers to hear symphony or opera, even when they lived prohibitively far from any concert hall. Four-hand piano reductions of symphonic and opera scores were the way they could bring the magic of the concert hall to the parlor of a private residence, via a couple of talented players.

Even today, however, when most of us have opportunities to hear orchestras and opera companies a lot more easily, piano four-hand music is still popular. Many of us love the full exploiting of the piano's richness that four hands can bring out: two hands playing the foundational bass, two hands giving us melodic and harmonic embellishments above.

The earliest piano four-hand music that we know of comes from the seventeenth century: one titled A Verse for Two to Play by Nicholas Carlton, and another by Thomas Tomkins called A Fancy for Two to Play. The tone of these titles suggests what, indeed, did eventually happen: piano four-hand music became thought of, for a time, as simple entertainment. The Style Galant school of music, emerging in the aftermath of the music of J.S. Bach, brought a simpler style of piano duet to the masses. People didn't have to be instrumental masters to play it; in fact, the Style Galant became so accessible that it turned into background music for parties—the earliest known "Muzak"!

This changed with compositions from Haydn, who wrote a series of duets largely to keep his "hand in" (no pun intended) while teaching piano students at the same time. In 1777, historian Dr. Charles Burney—who dabbled in music composition as well—published a series of pieces entitled, Four Sonatas or Duets for Two performers on One Piano Forte or Harpsichord. This collection was so popular it went to multiple editions. Then, a young composer named Mozart came along with his piano duets…and the rest (once again, no pun intended) was history.

But today, when we have unlimited access to music of all sorts, it might be puzzling why piano duet (four-hands) music is still so popular. One reason is obvious: it's fun to play. If you've ever sat on the bench making music of this kind with a friend, you know this; if you haven't, once you try it, you might just want to do more of it. Another reason is that, due to composers' attention to this medium, there is high-quality—and in some cases highly demanding—four-hand music out there that will be a nice challenge and change from solo playing.

Adjusting to playing in close quarters (piano benches and keyboards are not spacious!), learning to interact with another player to bring out themes, melodic lines, and appropriate phrasing as if one person is playing them, and the sheer beauty of using the entire keyboard and rich harmonies that are possible only with multiple hands on the keys…all of this, and more, is valuable learning for any musician. Piano four-hands can be the closest thing that many pianists come to playing "ensemble" music. That experience alone may "sell" you on this addition to your repertoire—not to mention that the live music experience is always better than any "Muzak" you can name!

Here is the list of our free piano duet sheet music.