The traditional song and nursery rhyme London Bridge, is cited in its earliest published form within Tommy Thumb's Pretty Song Book (c.1744). The song and associated game are part of English traditional folklore, and as such London Bridge is listed in the Roud Folk Song Index. Although the composer is unknown, it is widely believed that the song refers to the original London Bridge, spanning the Thames River, which was made out of wood. Originally constructed of wood and built in 1176 it was ordered to be demolished in 1823. This theory would fit with the first published date of 1744, as the bridge’s decay had been chronicled for many years.

The most popular version of the game associated with the London Bridge song, involves two people standing opposite each other with their hands connected and held high, to form an arch. A group of children sing the song while making their way in single file underneath the arch. At the end of the song, the arch is lowered to catch the person. The game is repeated until the last person remaining is proclaimed the winner. 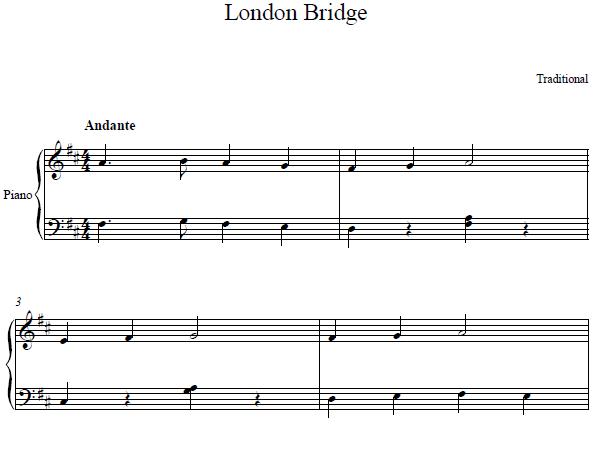 Do you love this easy sheet music? Check out our complete selection of easy piano sheet music and other piano scores such as Christmas carols, piano duet, Christian hymns, and many more.