Canon in D by Johann Pachelbel

Few melodies are as instantly recognized as Canon in D, by baroque composer, Johann Pachelbel. The famous canon has been immortalized in movies, such as Father of the Bride, and adapted by modern musicians, including the Beatles. It is a favorite piece for weddings and classical music collections.

Canon in D sheet music didn’t always enjoy such renown, though. No one knows for sure when Pachelbel penned Canon in D, but some writers have speculated that he wrote it for close friend Johann Christoph Bach’s wedding in 1694. After Pachelbel’s death, the piece was largely forgotten for over 200 years. In fact, most of Pachelbel’s music was lost and only one original written manuscript of Canon in D remains, currently housed at the Berlin State Library.

Canon in D was first published as sheet music in 1919 by scholar Gustav Beckmann. Since then, many arrangements have been published for piano solo, orchestra and string quartet. Modern musicians have even adapted it for electric guitar.

Canon in D, as the name suggests, is a canon, meaning that the piece employs a melody that is followed by a similar or repeating melody. Pachelbel originally wrote Canon in D for three violins and a basso continuo, which could be a harp, organ or harpsichord. Pachelbel’s original version also included a gigue, a lively baroque dance, which has largely been forgotten. What this means to the pianist is a fairly complicated piece. However, easy arrangements or duets are available in piano sheet music. 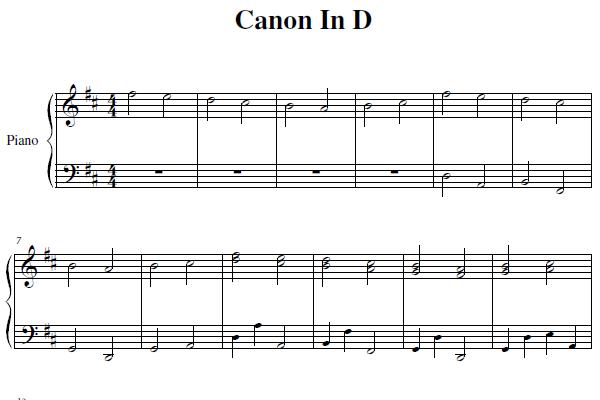 Hanti
Reply
I didn't know Canon in D was adapted by Beatles. Anyway, I really love Pachelbel's Canon. I would love someone to play this music on my wedding day. I'm glad the original manuscript has been preserved.
Jean
Reply
I can't read notes
mackenzie
Reply
can u write the notes down because i forget the notes of the music and the song is 'cannon in d" email me back the song with the noted written down please.
Quick View