Alouette, the famous French song is perhaps the most well known amongst English speakers, along with Frere Jacques. French Canadian in origin, the song is about plucking the feathers of a Skylark. French colonists considered the Skylark a game bird and a popular food of the period. The origins of the songs history pre-dates the first publishing in 1879, with some historians suggesting the original version of the melody at least was in France, although this is not catagorically confirmed. Americans servicemen were introduced to the song while serving in World War II, and ever since the song has been engrained into western culture.
Alouette has, and continues to be used in film and satire, in a variety of genres. The list of inclusions for the song in popular American contemporary culture, though far too great to mention in total, include: Here's Lucy, Bugs Bunny; Hogan's Heros and The Goon Show.
Today the lyrics have been modified, and the tune is used for teaching French to children in Canada, and around the world.
Print and Download Complete Alouette Piano Sheet Music
Download Alouette Audio File (MIDI) 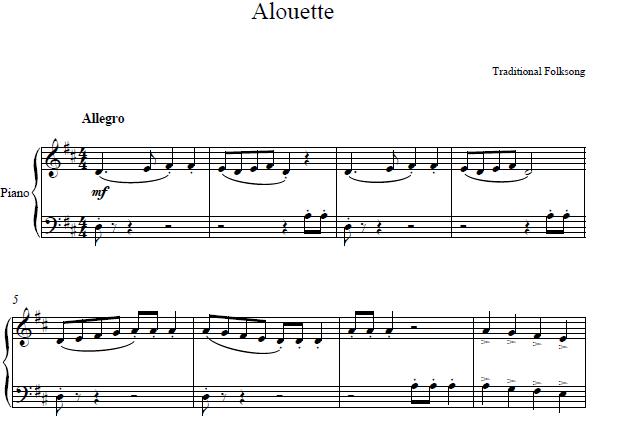